A DNA-based method for recognizing species

Imagine getting bitten by a spider, but being unable to tell what kind of spider it was (poisonous or not?!). To help organize our understanding of the diversity of species in the living world, Carl Linneaus invented a system for naming and classifying organisms in 1735. We still use this system today, and call it taxonomy. In Linnaean taxonomy, all the different kinds of living organisms can be organized practically into groupings with shared characteristics, where every species can be given a unique name. Biologists often identify species based on the way they look (anatomy), behavior, or evolutionary history, and assign them to a taxonomic grouping. In other words, if you had a close, detailed look at the spider that bit you, then you might be able to precisely determine what species it was!

We can also identify species based on their DNA. Genetic barcoding is a method for identifying species by looking at very short genetic sequences and comparing them to known species’ sequences, or DNA barcodes. Genetic barcodes are highly standardized and stored in databases, allowing us to identify samples much faster than classic taxonomy. We can now obtain the genetic barcode of a species from a very small biological sample, compare it to the barcodes of thousands of known samples stored in databases, and quickly find matches. This method was first proposed in 2003 and is now on its way to becoming a standard identification protocol for our biodiversity. Genetic barcoding is similar to the barcoding system of a grocery store, where each UPC code is associated with a certain product so they can be easily identified when we check out.

We can extract DNA from an unknown biological sample, then amplify (copy millions of times over) its short genetic barcode is using PCR. The barcode is then sequenced, so that its unique string of As, Cs, Ts, and Gs can be compared to a large database of known barcodes. 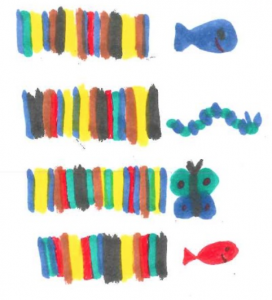 A database of barcode sequences is hosted by the Barcode of Life Data Systems (BOLD), containing more than four million samples from about 400,000 species!

In almost all animals, species barcoding is done by looking at sequence of the cytochrome oxidase I gene (COI), which is a 658 base-pair region of mitochondrial DNA. Mitochondrial DNA (mtDNA) is useful for barcoding because it mutates more rapidly than the nuclear genome, resulting in more genetic variability across species over short evolutionary timescales. At the same time, mtDNA is inherited maternally, which results in less diversity within animals of the same species. COI is

involved in the electron transport chain of cellular respiration, which is a very fundamental process of life, so it is present in all animals (and every eukaryote!). The COI barcoding sequence is short and can be amplified from many different species using the same set of PCR primers. For plants, on the other hand, the barcoding sequences are regions of chloroplast DNA known as rbcl (ribulose-biphosphate carboxylase) and matK (maturase K). In fungi the internal transcribed space (ITS) is used for barcoding. These different regions are chosen because they vary significantly across species, but not within one species for that taxon.

How it is used:

Through DNA barcoding, biotechnology has helped fill a gap left by classic taxonomy. The environment is changing because of human influence and extinction is occurring at an extremely fast rate. In order to monitor and understand these changes, scientists must have a fast way to identify organisms. DNA barcoding provides a quick method of species identification that becomes more accurate the more it is used. The larger a database of DNA barcodes becomes, the more accurate species identification will be, because each sequence will be compared to more organisms.

The existence of large DNA barcode databases also provides a network for global collaboration. The Moorea biocode project aims to create a library of all non-microbial life on the island of Moorea in Tahiti. The resulting library would be publicly available to all scientists around the world and serve as an example of a complete ecosystem. DNA barcoding makes biodiversity information more accessible and promotes collaboration.

Research suggests epigenetic mechanisms are important in how cancers silence antitumor systems and activate cells for rapid growth. The FDA has already approved two drugs to treat cancer by reactivating these antitumor systems. The list of epigenetic treatments for cancer, neuropsychiatric disorders, and other ailments is currently small, but it is growing. How large the field of epigenetic medicine will become is still an open question.

The International Barcode of Life Project (iBOL) is a collaboration of 26 countries that aim to create an automated identification system of all living eukaryotes. Ultimately DNA barcoding could result in a library of genetic markers and associated physical identifiers for all species. This library would make it possible to have virtually exact identification of any species using just PCR and sequencing of a certain gene. This is an example of the growing role of bioinformatics and global collaboration in scientific efforts. As the link between science and big data becomes more established, so will the need for global collaboration, citizen science, and other partnerships across scientific communities. You can get involved too! Using DNA barcodes to identify living species around you is relatively easy using a PCR machine, barcoding primers, and public databases. Students can help identify and characterize the biodiversity that surrounds us, whether in the wild or in your city. DNA barcoding creates a common language for scientists to work together and understand biodiversity.