Synthetic biology lies at the intersection of biology and engineering. One way to define synthetic biology is as ”the use of engineering principles to design and assemble biological components,” in other words, the artificial design of biological objects or living organisms using standardized rules. But this field is evolving so rapidly that its definition changes rapidly too.

Also known as synbio, the field can be viewed as the latest version of humanity’s toolkit to harness genetic information towards useful outcomes. For a very long time, humans have artificially selected desirable genetic traits by selectively breeding plants and animals. 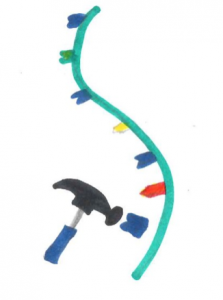 Since the 1980s biotechnologists have devised ways to directly manipulate the genetic code of organisms, and to move DNA around across species, using a set of techniques known as genetic engineering or recombinant DNA technology. More recently, biologists and engineers have learned how to make long stretches of DNA from scratch, and combine them using standardized rules to develop new biological functions. This is what many view as the fundamental feature of synthetic biology.

This emerging field is already being used to improve research and industrial applications, for example the production of biofuels or medically relevant biomolecules used to combat malaria. A major accelerator of synthetic biology has been the chemical synthesis of DNA on a large scale. As of 2016, multiple companies in the United States can artificially synthesize a sequence of DNA up to 10,000 base pairs long for less than $0.15 per base pair and in less than 2 weeks.

Synthetic biology could yield benefits to humanity through advances in medicine, environmental science, and energy, to name a few. But there are ongoing ethical and social debates around synthetic biology. Concerns about its potential outcomes are often divided into physical harms and non-physical harms. Physical harms refer to issues of safety and security, such as the potential danger of releasing engineered viruses and bacteria into the world. Should the sequences of such potential harms be kept private to prevent biological terrorism?

Non-physical harms are often focused on the role of human intervention in the natural world. Is it appropriate to genetically enhance human traits? Who would have access to those enhancements? The idea of synthetically creating DNA leads to many ethical questions because of the power given to the engineer.

These and other risk considerations are important but they should not overshadow the potential advances produced by synthetic biology. Realistically, it would be really hard to make new life forms to intentionally cause harm. In the words of 1995 Nobel Prize laureate David Baltimore, “the real danger today is from organisms that already exist. The idea of synthesizing something worse than that, of taking bits of Ebola and other viruses to create something more deadly, underestimates how hard it is to survive in the natural world.”

In May 2016, a group of leaders in science, business, and policy (many associated with Harvard University) announced plans to synthetically create an entire human genome. The project would be managed by the Center of Excellence for Engineering biology, a nonprofit organization.

The organizers compare this project to the Human Genome Project (HGP, another DNAdots topic), which successfully decoded the 3-billion base pair human genetic code in 2003. The newly created project would require similarly large resources (i.e., a $3 billion budget). If humans are to achieve genome-scale biological engineering, new technology will be needed. Just like the HGP significantly accelerated our ability to read base pairs, the new HGP-Write project might result in novel tools to make and edit genomes synthetically.

Potential uses of a synthetic genome include growing human organs for transplantation and engineering cell lines immune to cancer or resistant to infection. Despite the potential benefits of this project, there are also many ethical quandaries related to synthetic genetic material; for example, it raises the possibility of creating humans without biological parents. Successfully implementing the HGP-Write will require public engagement and consideration of its ethical, legal, and social implications.