Creating life where none previously existed has been the stuff of science fiction since Victor Frankenstein. The field of synthetic biology tries to make designing original life forms a scientific reality. Scientists designing synthetic life have several interests, ranging from studying life’s origins to engineering new approaches to medical or industrial problems. Far from victor Frankenstein’s monster however, the life that scientists are trying synthesize today are single-celled bacteria living in petri dishes.

Synthetic biologists take an engineering-like approach to creating cells. By tinkering with the cell’s genetic information and designing new genetic circuits, the hope is to design cells that can deliver new products or perform new processes. A first step toward engineering biological pathways that operate efficiently and cause minimal disruption to cell physiology, however, is to gain a deeper understanding of how a normal cell processes genetic information and how much of that information is redundant, a byproduct of its evolutionary history. Craig Venter and his team have set out to master these challenges by attempting to synthesize the minimal genome – the bare minimum amount of genetic information an organism can use to survive. In 2016 Craig Venter and team announced that they had created an independent organism with the smallest genome yet known. The DNA from this organism was synthesized by a machine, assembled by scientists and then used as the genetic material of a living reproducing bacterial cell. The organism functions with just 473 genes and demonstrates significant advances in the goal to develop life from scratch.

The process starts by synthesizing sequences that are roughly 1000 base pairs long. Each end of each sequence is designed to be identical to the end of one other sequence. Several different sequences with these overlapping segments are then put together in a tube with several enzymes. The enzymes match and join the overlapping sequences and the several 1000 base 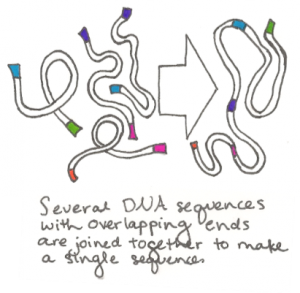 pair segments thus become one single long sequence. Scientists then repeat the process, taking the assembled DNA, now about 10,000 base pairs long, and joining it in the same way with other assemblies they have made. The process continues until the entire genome, all of the original small synthesized segments, has been joined together. This method of joining multiple DNA segments together simultaneously was invented by Daniel Gibson, a scientist at the J Craig Venter Institute, and has since been known as the Gibson assembly method. The assembled genome is then transferred into a related cell that has had all of its DNA removed.

In 2010, using the Gibson assembly method, the team created a JCVI-syn1.0 (short for J. Craig Venter Institute synthetic cell 1.0), a living cell containing a synthesized genome copied from the bacterium Mycoplasma mycoides. As the first living cell with a fully synthesized genome, syn1.0 represented a significant technical achievement. But with about 900 genes and over 1,000,000 base pairs, the genome was simply a slightly modified copy of a naturally occurring genome and was far from minimal.

To create a minimal genome, Venter’s team took the already small Mycoplasma mycoides genome and asked, what can we get rid of and still have a functioning cell? Venter’s team undertook a process of trial and error. The team mixed and matched synthesized segments of DNA, each time identifying whether genes and regulatory regions were necessary for the cell to be viable. In each round of testing, new genes were left out until they arrived at the 473 gene, 531,000 base pair genome that they could pare down no more. This cell they named JCVI-3.0. Their mix-and-match approach allowed them to eliminate not only unnecessary genes, but also unnecessary non-coding regions of the DNA. Perhaps most intriguing about the final genome is that over 31.5% of the genes, 149 in total, are of unknown function.

A new frontier, or just some new techniques?

There has been some debate on whether JCVI-3.0 actually qualifies as a truly synthetic life form. While the genome that the Venter team created was chemically synthesized, the cell hosting that genome was not. Also, while the synthetic genome was minimized and highly engineered, it still only contained the genes from a single naturally occurring organism. And while the finding that 31.5% of genes necessary for life have an unknown function is biologically interesting, some people question how well something can be engineered if you don’t know how 31.5% of the components work. Still, the creation of the syn3.0 cell was unquestionably a significant technical accomplishment which has advanced the field of synthetic biology in several ways. The Gibson assembly method, used to assemble the various DNA fragments, for example, is already a widely used protocol in the molecular biology field, and the ability to synthesize larger sequences of DNA more cheaply also has widespread implications.

of biofuels in the future. Now that Venter’s team has demonstrated the ability to completely synthesize a genome, the next immediate questions become how that genome can be modified and added to. Many people believe that new efficient genetic engineering tools such as CRISPR/Cas9 have made the need for creating synthetic genomes unnecessary. Regardless of whether completely synthetic cells become commonplace in the biotechnology of the future, the techniques developed to make the syn3.0 cell have already increased the tools available to biologists, and you can bet that those tools will be used.